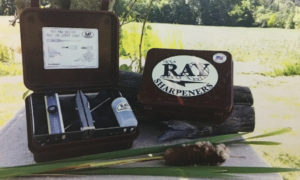 Howard Ray Longbrake, the originator of the LORAY sharpener started in 1970 with his first broadhead sharpener. It was made out of wood and he used only a file. This may sound like a crude way of putting an edge on a blade but being able to maintain an exact angle with every stroke made this device work very effectively. Fellow hunters shortly saw how easily Ray was sharpening his broadhead knives and they too wanted the device to keep their blades sharp! This ultimately guided Ray to the basic design of the “clamp on, guided” type of sharpener which is being duplicated and sold all over the world today.

In the beginning the LORAY sharpener was simply known as a “broadhead sharpener”. After contemplating many ideas for a catchier name for the new founded company his ideas kept leading back to the person he has loved and been married to for 59 years, his wife. So he combined the letters of her name with his name creating “LoRay Sharpeners”. This inspired him greatly to push forward and dedicate this as a full time job to get a sharpener in the hands of every person that had a need to sharpen a knife.

Ray was a very simple family man who had no upper education. He worked in heating and cooling prior to his new endeavor. He spent many hours away from home and had many hardships while he perfected the sharpener so he could earn enough to support his family. Even though he still thought it very important to make time to enjoy weekends of square dancing with his wife and camping trips with his family.

Unfortunately, Ray passed away December 24, 2009 from complications from a long term illness of Alzheimer’s disease. After his passing and in his honor, Ray’s son, Mark Longbrake, and his family friend Ronald Roerig have continued to improve on the original LORAY sharpener to make it more efficient in the world today. This is the model that you see here now.